Manga / Only the Flower Knows
aka: Hana No Mizo Shiru 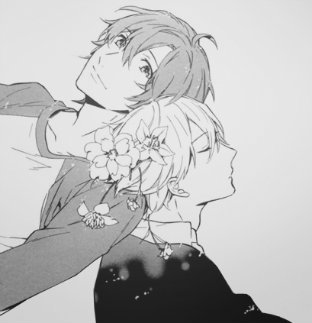 Only the Flower Knows (JP: Hana no Mizo Shiru) is a Boys' Love manga created by Takarai Rihito (artist of Seven Days and The Sleepy Residents of Birdcage Manor), serialized in Craft magazine. In 2011 it was licensed by DMG for English-language release.

Arikawa has an unexpected encounter with a student from his university, Misaki; he gives him a hand when he trips, carrying a bunch of potted plants. Shortly afterwards, he bumps into him again at the train station, and accidentally picks up his necklace, which seems to have sentimental value... Then he starts having recurring romantic dreams about him, although he doesn't actually remember him, since he didn't have his glasses on at the time.

The two end up working together doing agricultural research in the labs, under Professor Tsujimura, and gradually become friends. There's potential for more, but there are also some obstacles to romance (namely the fact Arikawa already has a girlfriend; the fact Misaki alternates between acting shy and cold/distant towards Arikawa; and a mysterious man who won't stop calling Misaki's phone, and seems to have some sort of history with him...).