Manga / No Matter How I Look at It, It's You Guys' Fault I'm Not Popular!
aka: Watamote 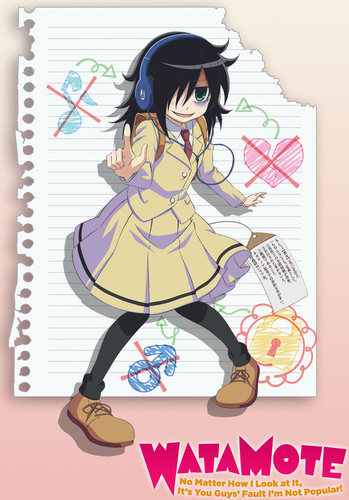 Why, who's this fine babe!? There oughta' be lines out the door to see her!
Here we have a particular girl.
An unpopular girl.
And her story... that really doesn't matter.
Tomoko: In other words, an ugly girl who guys don't like. That's not me at all.
Advertisement:

No Matter How I Look at It, It's You Guys' Fault I'm Not Popular! (Watashi ga Motenai no wa Dō Kangaete mo Omaera ga Warui!), also known by its official shorthand "WataMote", is a Cringe Comedy manga published online by Nico Tanigawa (actually two people). The series initially took off due to developing a cult following on /a/ and /v/, turning into something of an Anglophone darling as a result. Later on, it developed into something of a Coming of Age Story, focusing on Tomoko's relationships with the friends she does manage to make, resulting in a large cast of oddballs.

As a sort-of-milestone special, Volume 18 of the series included a special edition that finally came with official character bios as well as What If? stories featuring what would happen if Tomoko befriended different cliques of girls during her first year. Volume 20, which was a milestone special (marking 20 volumes and 10 years of serialization), included a special edition with the results of a character popularity poll as well as stories following up on the What Ifs.

No Matter How I Look at It, It's You Guys' Fault I'm Not Popular! provides examples of: