This may be sudden, but... Ogawa Chiaki is a man. 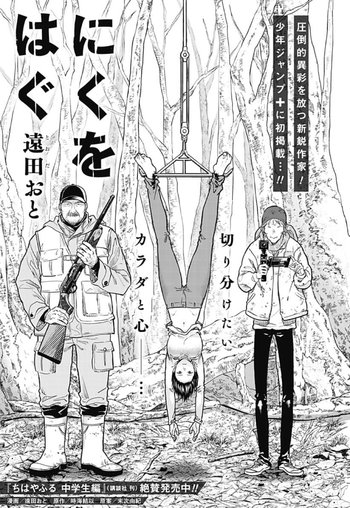 Ogawa Chiaki makes a living as a Youtuber filming himself cleaning the meat from his father's hunts. Sure, there's a lot of creepy comments to deal with, but it's easy money. He has bigger things to deal with— such as his father's announcement of his colon cancer diagnosis, and his subsequent desire for Chiaki to settle down and get married. The thing is... Chiaki's father still thinks Chiaki is a woman.

Niku wo Hagu (literally "Cutting the Meat" or "Stripping the Flesh") is a short one-shot manga by Oto Tooda that was published in Shounen Jump Plus in 2019. The manga can be read in Japanese here.