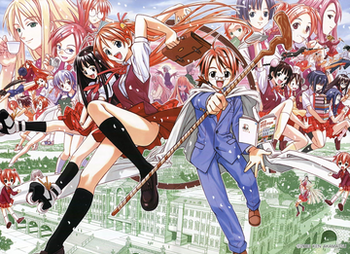 Happy Ready Go!!
"Our Magic is not omnipotent... a little bit of courage is the real magic."
Advertisement:

Negima! Magister Negi Magi (also known in Japanese as Mahou Sensei Negima!) is a shonen manga by Ken Akamatsu, creator of Love Hina. The manga originally ran from February 2003 to March 2012 in Weekly Shonen Magazine, for a total of 355 chapters/38 volumes.