Manga / Nausicaä of the Valley of the Wind 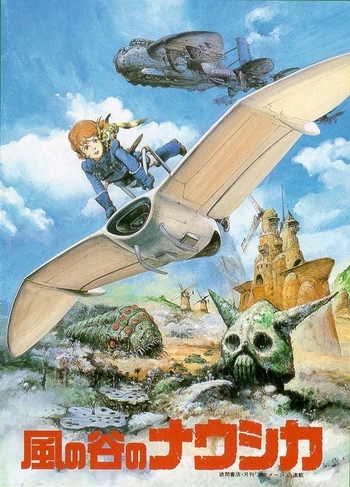 "And that one shall come to you garbed in raiment of blue, descending upon a field of gold... to forge anew our ties with the lost land."

Nausicaä of the Valley of the Wind (風の谷のナウシカ, Kaze no Tani no Naushika) is a post-apocalyptic Science Fantasy manga and animated movie by Hayao Miyazaki. In a World... dominated by a caustic forest full of colossal and deadly arthropods, one of the few places left habitable is the Valley of the Wind—a place where toxic spores produced by the forest are kept from settling by the constant ocean breeze. The crash of a gigantic airplane and subsequent incursion into the Valley by Torumekia leads to the revelation of a secret that could destroy what's left of humanity, if not the world...

Visually inventive and gripping, the heroine—the eponymous Nausicaä—eventually learns a Green Aesop about living in harmony with Gaia.

The success of the movie—Miyazaki's first independent worknote the first film he directed was 1979's The Castle of Cagliostro, which he did at Studio Telecom for Tokyo Movie Shinsha—led directly to the founding of Studio Ghibli and inspired Chocobos; it's also where Hideaki Anno got the prototype for the Evas (since Anno was handpicked by Miyazaki to be the lead animator for the inspiring scene). Anno would later produce a short tokusatsu film spin-off featuring a live-action version of the creature entitled Giant God Warrior Appears in Tokyo.

Since Miyazaki's only directorial credits up to that point (with one exception) were the television shows that he'd worked on with Isao Takahata— all adaptations of proven popular works— publisher Tokuma Shoten was not willing to give him financial backing for his proposed anime projects (Warring States Demon Castle (戦国魔城, Sengoku ma-jō), to be set in the Sengoku period, and an adaptation of Richard Corben comic Rowlf), as they were not based on existing manga. An agreement was reached that Miyazaki could start developing his sketches and ideas into a manga with the proviso that it would never be made into a film. So he did, publishing Nausicaä in Tokuma Shoten's monthly Animage magazine beginning in 1982. But it quickly became Animage's most popular feature, and Tokuma Shoten encouraged Miyazaki to work on a film adaptation, which eventually came out in 1984. Even after the film's success, he continued to occasionally put out new manga chapters in between working on his later movies, finally finishing the story in 1994, just in time for the film's tenth anniversary.

It is worth noting that the manga diverges significantly from the animated version. For one, the manga's story is much more vast—introducing settings, important characters, and even entire races of people that are never mentioned in the movie (which is understandable for the ¾ of the manga made after it). The result is two very different takes on the same basic concept, both by the same man.

The combined whole, meanwhile— film and manga both— ended up becoming one of the most influential fantasy works in modern Japanese pop culture and its influence is felt keenly even in the 21st century. Never mind the horseclaws, Nausicaä made popular the idea of an After the End setting with a major technological past that still influences the present, Nausicaä herself paved the way for generations of anime leading heroines, and the visual design of the Sea of Corruption and the flying ships has influenced media Japan-wide for decades. Works like Granblue Fantasy owe a huge debt to it, Final Fantasy as a whole likely wouldn't be what it is without it, and Neon Genesis Evangelion owes its entire existence to behind-the-scenes disputes over sections of the movie and was massively inspired by parts of it. And these are just a few examples.

Just one year after its Japanese theatrical premiere, the Nausicaä movie gained the distinction of being the first Miyazaki work to see North American release... but unfortunately, with one of the worst treatments in the history of the medium. In addition to renaming most of the characters (standard practice at the time), over half an hour of the film that lacked any sort of action was thoroughly excised, paring the 117-minute film down to 95 and turning the Green Aesop into a fragfest. This newly-cut film, now retitled Warriors of the Wind, appalled Miyazaki & co. so much that it led directly to Studio Ghibli's now-famous policy of not allowing international distributors to cut or alter even a single frame of the animation, aside from translating the credits and title logo (and, resultingly, led to a decade-long export freeze of Miyazaki films). It took over 2 decades for Nausicaä to return to America, but the current English version, produced in 2006 by Ghibli's longtime partner Disney and approved by Miyazaki himself, is completely uncut and uncensored.

Three video game adaptations of Nausicaä were released for the MSX; two were top-down shooters but where Nausicaä does negotiations with human villages to prevent war and drops stun bombs (NOT regular bombs) on Ohmus as a strict self-defense measure. They were, however, mediocre in their gameplay, and flopped. As a result, not counting a Future Boy Conan videogame adaptations, no further games based on Studio Ghibli works were produced (not that it kept the studio from doing the art direction for other games, like Jade Cocoon for the PS1, among others). A very common Urban Legend has it that those games greatly offended Miyazaki, based on the wrong assumption that the games openly subverted the message of his film. Interviews following Ni no Kuni's release, and an actual look on those rare games by Hardcore Gaming 101, debunked these rumors, with Studio Ghibli even being open to a Castle in the Sky adaptation.

Alternative Title(s): Nausicaa Of The Valley Of The Wind