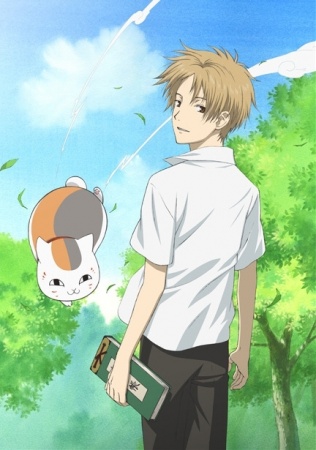 Natsume Takashi & Nyanko-Sensei.
"Ever since I was little, I have sometimes seen strange things. As others cannot see them, they are most likely what you would call 'youkai'".
—Natsume Takashi
Advertisement:

Natsume's Book of Friends (Natsume Yūjinchō) is a Shoujo manga written and illustrated by Yuki Midorikawa. It has been serialized in LaLa since 2005 and is still ongoing.

Natsume Takashi is one of those manga protagonists. All of his life, he has possessed the ability to see spirits. He's been tossed about from home to home for most of his life, unable to fully interact or be honest with people due to the way they tended to react to his bizarre ability. As a result he is Not Good with People at all. So yeah, kid's got angst.

Natsume's ability to see spirits is a power he inherited from his grandmother, Reiko, who made a personal hobby out of gathering the names of as many spirits ("Youkai") as possible binding them to her servitude via writing their names in the titular Book Of Friends - a highly prized item that many denizens of the spirit world desire for themselves. Upon her death, Reiko bequeaths to her grandson several of her belongings - including the Book.

Upon discovering the purpose of the Book of Friends, Natsume makes it his mission to return all of the names his Grandmother took to their appropriate spirits. Yes, including the evil ones who want to kill him. He spends his time releasing the various spirits that come to him for help from their contracts and trying to stay alive in the face of the ones who'd rather just eat him and take the book for themselves.

One spirit in particular, Madara (aka Nyanko-sensei), who spends most of his time in the body of a lucky cat (when he's not going One-Winged Angel on us in which case he appears to be an giant inugami), is particularly helpful when it comes to the not-letting-Natsume-get-eaten thing. He serves as Natsume's bodyguard and spiritual adviser, and his main motivation is apparently to possess the Book of Friends - which Natsume has promised to Madara, should he be killed.

There is an anime based on the manga divided in four thirteen-episode seasons, with a fifth announced

for a Fall 2016 Anime season release, after a hiatus of 4 years (the fourth was released in the Winter 2012 Anime season). The sixth season followed in the Spring 2017 Anime season.

An appropriate word of description for this series would probably be "heartwarming". It's been described as "Tactics, but less violent", though it definitely has its moments. The occasional outbursts of action are balanced out against gentle explorations of the supernatural, basically it's a light-on-plot, Slice of Life take on the spirit world, and a sometimes exciting, sometimes peaceful foray into the world of the supernatural.

Many of the chapters, especially in the first-half, were stylized to be closer to stand-alones so that anyone starting the series could have a basic understanding of the plot (though some stories are up to three chapters long).