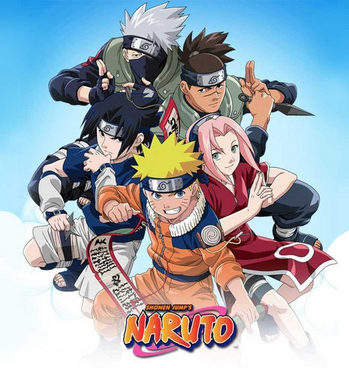 In a World… rife with Ninja, one boy seeks to become the greatest ninja there ever was. That boy is Naruto Uzumaki, a twelve-year-old ninja-in-training who tries to make up for his disadvantages with enthusiasm and sheer determination.

However, Naruto's cheerful disposition hides a dark secret: when he was but a baby, his hometown of "The Village Hidden In the Leaves" (Konohagakure) was attacked by a monstrous creature known as the "Nine-Tailed Fox" (Kyūbi). The beast was eventually subdued, but not before it had killed many of the strongest ninja of the village. Furthermore, the beast had to be sealed and contained inside the infant Naruto's body, and the boy has had to grow up with the stigma of basically being a living prison for a malevolent monster.

The English dub ran on Cartoon Network's Toonami in the U.S. When the news first spread that Naruto was hitting the States, despite the fanbase's fears, 4Kids had little, if any interest. But Viz Media had plenty of interest, since they scooped up the license and dubbed it for the U.S. audiences. At first, it seemed like it would be marketed as a kiddie show with blood — Never Say "Die" was in full effect — but the Wave Country arc onwards saw free usage of the words "kill", "die", etc.

. For American users, Hulu features all the episodes.

(If, like many of us, you don't live in the U.S., you can also watch Naruto for free at Crunchyroll