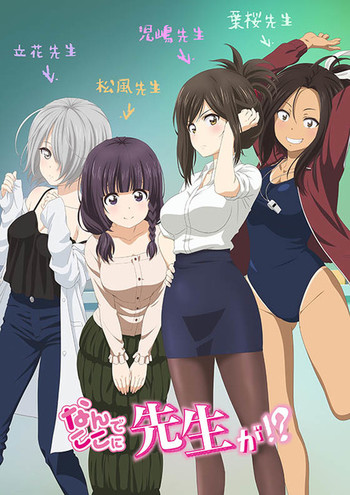 Seriously, Why are they Here!?

Nande Koko ni Sensei ga!? (translated as "Why the Hell are you here, Teacher!?") is an ongoing Ecchi Romantic Sex Comedy manga by Soborou. An animated adaptation has been released in Spring 2019.

Kana Kojima, a high school Japanese language teacher at Kawanuma West, is famous for being a "demon teacher." However, in front of high school student Ichirou, she seems to be air-headed and clumsy, and he keeps finding himself in perverted situations with her in places like the in men's bathroom, in the men's bathhouse, in the pool, at the school infirmary, and elsewhere.

And they're not the only ones, with several students finding themselves in perverted situations with their teachers.