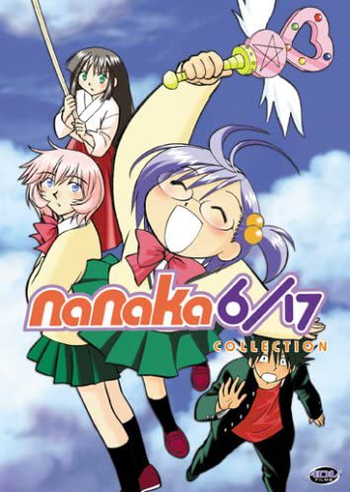 Magical Domiko! Transform me into an adult!
Advertisement:

Nanaka is a 17-year-old high-school student who's completely obsessed with preparing her college exams, to the point of being looked down upon by her classmates. She's extremely frustrated by her childhood friend Nenji, an immature punk who keeps getting into fights with the local bullies. On a fateful day, Nenji decides he's had enough with Nanaka's nagging, and tells her to sod off.

She doesn't take the news well.

After fainting dramatically, she falls down a flight of stairs, hits her head violently on the pavement, and has to be taken to the hospital. There, it appears that she has complete amnesia from age 6 and upwards, ending up with the personality she had when she was 6. There's no telling when she will be back to normal, if ever. Nanaka's father urges Nenji to help her recover, and to protect her in the meantime. Nenji manages to cook up an acceptable explanation to Nanaka: they both "magically" grew up from 6 to 17, which is a game they used to play at that age in imitation of her favorite Anime, Magical Domiko. But they will still have to grow up mentally.

Hilarity Ensues when she has to go back to school. Most of her classmates misinterpret her childish behaviour as flirtiness and hate her even more. Nenji has great trouble trying to prevent her from perpetually humiliating herself. But the most surprising part is that, however tiresome she can sometimes be, the 6-year-old Nanaka is sweet, cheerful, earnest and as a whole much more loveable than her 17-year-old self. One wonders what the heck went wrong with her growing up. Should Nenji really try to bring her back to normal?

Nanaka 6/17 is a fun light-hearted (if sometimes bittersweet) comedy about growing up and how much one should change between childhood and adulthood. There's no easy answer though, and it does not end with a forced Happy Ending.

The manga, written and illustrated by Ken Nagami, was serialized from 2000 to 2003 in Weekly Shonen Champion before being adapted as a Thirteen Episode Anime in 2003. All thirteen episodes of the English dub are available

, though the last five episodes are mislabelednote The video titles and descriptions act as if the Bonus Episode is in its chronological place when it's actually at the end of the series. To view the series in proper chronological order, watch episodes 1-8, then "13" followed by "9-12".