Manga / My Bride is a Mermaid 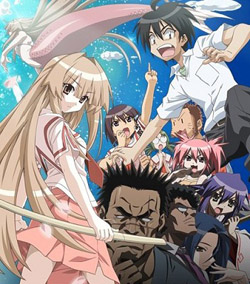 Do not let the above image fool you. It's far from serious.
"Please laugh along. This is the beginning of young love".

While on a visit to his grandmother's, a schoolboy named Nagasumi nearly drowns in the sea. Before passing out, he catches a glimpse of a young mermaid. Nagasumi is found on the rocks, but no one believes his mermaid story... until that young girl, Sun Seto, appears at his home, asking Nagasumi to take responsibility for what happened by marrying her. Turns out that saving him broke the mermaid code of secrecy and one of them must be executed to preserve it, so Sun chose a third option by proposing marriage.

Unfortunately, Sun is also the daughter of a mermaid Yakuza clan, and her fiercely-overprotective father and several other clan members are not happy with the engagement and would rather just have him killed and be done with it. And there is also the matter of keeping it a secret that Sun is a mermaid as she starts attending his school. Then, of course, there's the matter of Sun's pint-sized bodyguard, who would like nothing better than to murder Nagasumi. Oh, and Sun's family decide it's a great idea to off some of the staff at Nagasumi's school and take their place so they can better watch Nagasumi. Do we really have to say it?

The anime has been licensed by Funimation under the title My Bride is a Mermaid. All 26 episodes of the anime, both subbed and dubbed, can be seen at Funimation's site here

. The full series is available on DVD.

A character sheet for this series is under construction.

Alternative Title(s): Seto No Hanayome, My Bride Is A Mermaid