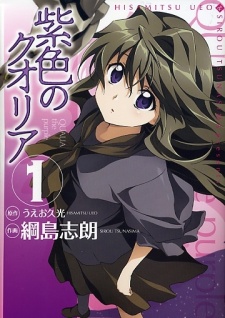 The purple-eyed deuteragonist
"I’ll visit upon you the utmost suffering with the infinite possibilities of infinite worlds. I act once more in imitation of light."
—Hatou Manabu
Advertisement:

Hatou Manabu (nicknamed Gaku) has a very odd friend at school named Marii Yukari. Yukari has purple eyes and a bizarre way of looking at the world: she sees all other living things as robots. This has not always worked out well for Yukari, even costing her a best friend when she was younger. However, Yukari insists that the things she says she sees is true, and her vision seems to give her insight into the abilities of others.

Gaku thinks she's just weird, but she soon realizes that Yukari has unexpected talents. It seems she can fix anything, and even the police come to hear her insights. It turns out that Yukari's purple eyes are not unique in the world! However, there is one important distinction among those who see humans as other objects. Do humans appear as unimportant as objects, or do those objects appear as important as human beings?

Starting as a seemingly lighthearted series with a sci-fi premise, it quickly makes good use of said premise, turning much darker soon enough. The fast genre shifts and the surprisingly detailed use of physics concepts are some of the most prominent characteristics of this work.

Murasakiiro no Qualia (or Qualia the PURPLE in English) is a one-volume science fiction novel written by Ueo Hisamitsu. The book also had an manga adaptation serialized in Dengeki Daioh, which was completed after three volumes and eighteen chapters.

Murasakiiro no Qualia contains examples of the following tropes: