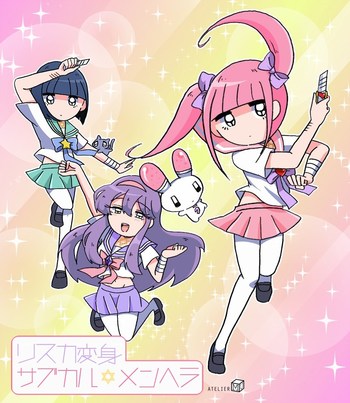 Menhera-chan is a manga by artist Ezaki Bisuko. Depressed Ordinary High-School Student Momoka Sakurai is one day attacked by jealous classmates possessed by a demon. Her stuffed rabbit begins to speak to her, telling her to spill her blood on it. When she does, he empowers her to become the Magical Girl Menhera Pink (or Menhera-chan, as her friends call her). Armed with a magical box cutter, Menhera-chan can defeat the demonic forces... Maybe.

The manga and its characters became very influential in Japan's alternative fashion scene, inspiring a new subgenre of Harajuku fashion called "Yamikawaii" (creepy cute). The manga itself was designed as an outlet for Bisuko's suicidal feelings as a result of studying for his entrance exams into school and as such deals with dark subject matter, such as Parental Abandonment, self-harm, and suicide.

This manga features examples of: