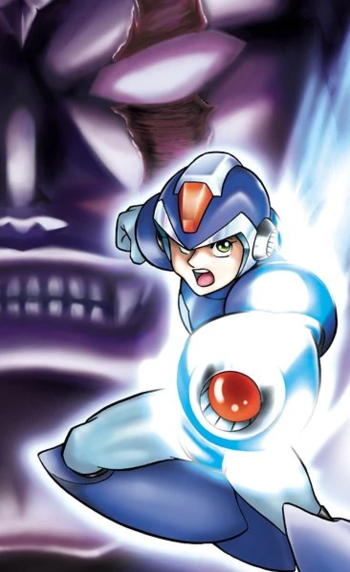 "Because I know that humanity will have to wage many wars against evil in the future, I am leaving behind the strongest robot in history..."
— Dr. Thomas Light, Chapter 1: Awakening
Advertisement:

Rockman X is a manga adaptation of the Mega Man X series, authored by mangaka Yoshihiro Iwamoto and serialized in Kodansha's Comic BomBom magazine from 1994 to 1998. It is notable for its additional characters, Adaptational Expansion of the games' simple plots, and being even Darker and Edgier than ever. It has never been officially translated outside of its original Japanese releases, though fan translations are common online.

The manga managed to fully adapt the first three games in the Mega Man X series (and almost all of the fourth) before its cancellation. It has since maintained sort of a cult following in Japan for its unique take on the world of Mega Man X, and Iwamoto has found success illustrating other X products such as the novel Rockman X: Irregulars Report and the continuations of the Mega Mission Carddass series, Mega Mission 4 and Giga Mission.

A short adaptation of the climax of the fifth game was also released for the X series' 25th anniversary.

Manga in the series include: