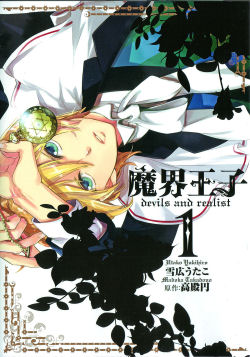 William Twining is a realist who lives a comfortable life with his uncle, Lord Barton, and his butler, Kevin, in Victorian Britain. Despite believing in the power of science over the power of God, William attends a prestigious and expensive school with the hope of eventually becoming a successful politician or lawyer. On returning home for the holidays, however, he is received by Kevin, who informs him that Uncle Barton's business endeavors have failed and that the Twining family is now essentially bankrupt. Desperate to find something of value to sell in order to pay off his overdue school fees, William searches the now-empty mansion and stumbles upon a Secret Underground Passage leading to a locked door. He breaks the door down, accidentally cutting his hand in the process. When blood from the wound drips onto a seal carved into the floor, the demon Dantalion, duke of the 36th army of hell, is inadvertently summoned. Dantalion declares that the demons' emperor Lucifer has taken to a long sleep and that the demon world needs a leader to rule in his place. He then reveals that William is a descendants of King Solomon... and that he's the only one who can decide who will become the acting ruler.

William is then thrust into the world of demons and angels as candidates for the emperorship begin seeking him out, some to appeal for his vote and others to eliminate him altogether. Throughout all the otherworldly chaos, William continues to stubbornly refuse to acknowledge the existence of the supernatural and attempts to carry on his school life as normally as before despite the mounting danger rising around him. Throw in some scheming angels who want Solomon's soul for themselves and a full-scale war between heaven and hell, and William's life goes from strange to downright perilous.

Makai Ouji: Devils and Realist (Hell Prince: Devils and Realist) is a comedy/fantasy Josei manga that began its run in Comic Zero-Sum magazine in 2009. It is written by Madoka Takadono and illustrated by Utako Yukihiro and spans 15 volumes.

Now has a Character Page in much need of love.