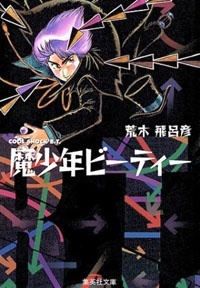 Magic Boy B.T., also known as Magical B.T. and Cool Shock B.T., is Hirohiko Araki's first serialized series. Running from 1982-1983 in Weekly Shonen Jump, it's a collection of short stories featuring the titular character, B.T., whose name has been censored into his initials, and his borderline-criminal escapades with his (often unwilling) friend, Koichi.

The manga recieved a sequel one-shot by NisiOisiN and Demizu Posuka, set 60 years later. Titled Magic Man B.T. (or Cool Shock Old B.T.), the now-older B.T. and Koichi get into an adventure after meeting a mysterious man.

Not to be confused with the 1958 film Shonen Sarutobi Sasuke (relased as Magic Boy in the US).

Also not to be confused with the mecha anime B't X.