Manga / Koi to Uso
aka: Love And Lies 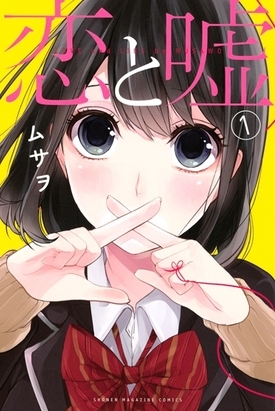 In the near future, to combat a low birth rate, Japan has implemented the Yukari Law. When young people turn 16, they are assigned a marriage partner by the government.

Yukari Nejima is one of these people. On the eve of his 16th birthday, he resolves to confess his feelings to his crush of six years, Misaki Takasaki. To his great surprise, she returns his feelings. However, shortly afterword, he is assigned as a marriage partner to one Lilina Sanada. Despite a rocky start, Nejima and Lilina become friends and she takes a great interest in Nejima's relationship with Takasaki.

Koi to Uso (Love and Lies) is a manga by Tsumugi Musawo. The series got an animated adaptation for the Summer 2017 Anime season, and a live action adaptation in Fall 2017, instead focusing on an original plotline about the Love Triangle between three different people and centered around Yuusuke's niece Aoi. Three Drama CDs, one even concerning the story of the government officials, were released the same year.