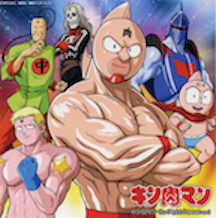 Front Row: Terryman, Kinnikuman, Meat
Back Row: Ramenman, Kinkotsuman, Robin Mask
I won't even need the push from my farts!
— Kinnikuman
I have no idea what he just said, but what confidence!
— The usual response from anyone to the quote above.

A classic Shonen Jump manga, Kinnikuman began as a spoof of Super Heroes in the vein of Ultraman, but changed gears after its initial story arc to become a semi-serious story where Professional Wrestling is Serious Business and used to determine the fate of the world.

It begins with the title character, Kinnikuman, attempting to make a name for himself as a superhero by fighting giant monsters. Kin has the unexplained ability to grow to a giant size by eating garlic and give the monsters someone their own size to pick on... However, Kinnikuman is an idiot, a klutz, a pervert, and a total coward, causing him to do more harm than good. However, the one thing Kin has on his side is that he's a Determinator in spite of his cowardice, and he eventually comes through in order to save the day.

One day, Kin meets Alexandria Meat, The Short Guy with Glasses, who reveals to him that he is actually Suguru Kinniku, an alien from a Planet of Hats where the "hat" just happens to be Professional Wrestling. It turns out that Kinnikuman is actually the planet's crown prince, who as a baby, was mixed up with a pig during a family vacation to Earth and left there. After reclaiming his birthright by sheer luck (Kin challenged the pig to a series of challenges and lost every single one, but the butcher who owned the pig came to claim him), Kin is sent back to Earth to become a true hero and prove himself worthy of the throne. Meat goes along with him acting as his trainer and sidekick.

Back on Earth, Kin makes friends with American superhero Terryman, and together they enter the Choujin Olympics, a Pro-Wrestling tournament that gives the winner the title of the world's strongest hero. With this, the Genre Shift is complete, and the rest of the series focuses on Kin's wrestling career, where he befriends other heroes (and villains), takes down multiple Big Bads, and saves the world multiple times before going on to finally ascend his planet's throne after having achieved galactic-level peace...

...Well, until Ultimate Muscle that is...

In 2012, the original manga got a direct continuation note Still ongoing, as of July 2018, picking up where the Scramble for the Throne arc left off, introducing all-new characters, all-new stakes, and a lot of call-backs to the original run. Due to it conflicting with Ultimate Muscle and especially its sequel Kinnikuman Nisei: Ultimate Chojin Tag Match note Most of which is also set after the Scramble for the Throne arc , both have been effectively rendered non-canon note Or arguably, part of an alternate timeline altogether.

This series won't even need the push from its farts to list examples of:

Taken to a ridiculous level in Kinnikuman, where Warsman uses cossack dancing to take down Bulldoggy and Big Magnum

Example of:
Taking You with Me

Taken to a ridiculous level in Kinnikuman, where Warsman uses cossack dancing to take down Bulldoggy and Big Magnum