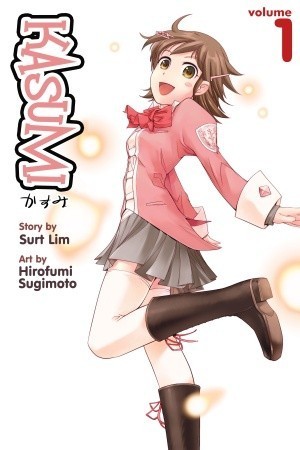 When a stage magician gets actual magic.
Sixteen-year-old Kasumi Morioka never stays in one place for too long due to her father's profession as a botanist. One day, she and her father are driving to their new home when her father stops in a forest along the way, examining the plant life. Kasumi, exploring the forest on her own, finds a sphere of light which leads her to a magnificently tall tree; Kasumi climbs it to chase the sphere of light further. When she almost reaches it the branch she is standing on breaks; Kasumi cuts open her left hand when she tries to grab a higher branch. As she is falling she fervently wishes not to leave her father alone, since her mother died long ago. Many more spheres of light furiously surround her, breaking her fall.
Advertisement:

When next she wakes up she is in her new home, the cut on her hand completely gone though Kasumi can still feel it pain her occasionally. On that day she is to start at her new school, Seiran Academy, where only the highest elite attend. Upon arrival Kasumi is met by the Student Council President Ryuuki Hasegawa and the Vice President Reika Takemoto. Later, due to a misunderstanding with Ryuuki, Kasumi becomes the target of bullying by Reina and the RSF (Ryuu-Sama Fanclub). With the help of her new friends Yuuta Goodwin and Maiko Koyanagi, not only does Kasumi have to fend against the RSF and an indifferent Ryuuki, but also has to figure out a New Super Power she discovers she has: an ability to turn invisible when holding her breath. However, one question remains: how does Ryuuki know about Kasumi's new ability?

Kasumi is a shoujo OEL Manga series published from 2008 to 2009. It was written by Surt Lim and illustrated by Hirofumi Sugimoto.