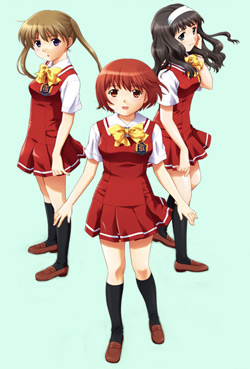 Kashimashi: Girl Meets Girl is a Yuri Genre manga written by Satoru Akahori (writer of Saber Marionette J, Sorcerer Hunters, and Maze Megaburst Space) and illustrated by Yukimaru Katsura. It ran in Dengeki Daioh from 2004 to 2007, and a 12-episode anime adaptation aired in 2006.

Hazumu Osaragi has been having a rough time lately. The object of his affections, Yasuna Kamiizumi, has just turned him down (though it probably doesn't help that she very literally can't see men). Climbing to the top of his favorite mountain to have himself a sulk, his day starts to look up when he gets to see something that few people ever see in their lives: a UFO!

It's just a shame about the whole "crashing on him and killing him" bit.

Luckily for Hazumu, though, the ETs found it in their hearts to stitch him back together... but being aliens, they don't have the best conception of human biology. And so, as they announce to the town, Hazumu Osaragi is reborn... as a girl! Not only does Hazumu have to adjust to her new life as a girl, but she also finds herself in the center of a Love Triangle between two other girls: the elegant but cold and withdrawn Yasuna, and Hazumu's tomboyish childhood friend Tomari Kurusu.

"Kashimashi" is both the name of the town and school where the series is set ("Kashima-shi") and the Japanese word for "noisy". A Japanese proverb holds that "when three women get together, it's noisy (kashimashi)," the joke being that the kanji for "kashimashi" contains three of the characters (no pun intended) for "woman" or "female." (You may remember Tomo from Azumanga Daioh quoting it.)

Hazumu provides a rare case of Gender Bender where the one whose gender has been bent doesn't seem to really care that much about the predicament. It's possible she is actually happier this way from the beginning without a lot of the protesting that would appear in other series. The love triangle in the show also gets presented in a pretty straightforward way, all but completely disregarding that the story is in fact about two girls who try to win the affection of another girl.