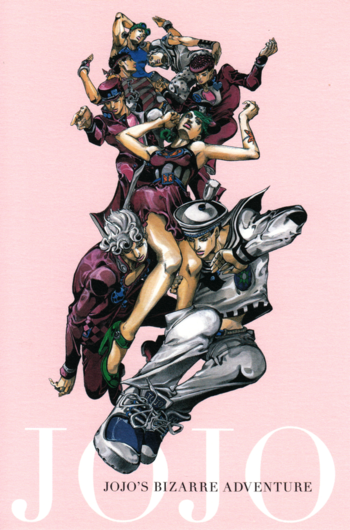 The Joestar bloodline.note From the top: Joseph, Johnny, Jonathan, Josuke, Jotaro, Jolyne, Giorno, Josuke ("Gappy", "Jo2uke")
"This story depicts the mysterious Stone Mask from Mexico, and its effect on the destinies of two youngsters and their Bizarre Adventures!"
— The prologue of chapter 1... of 957.
Advertisement:

The series tells the story of the Joestar family and their endless conflicts with the supernatural. The series spans well over 100 fictional years (and volumes), having been continuously published since 1987. Each part of the saga chronicles the adventures of a member of the Joestar bloodline, which spreads all over the world and gets pretty bizarre. They all have three things in common: a star shaped birthmark, a destiny to fight evil, and the nickname JoJo. Also central to the series are the power of Hamon, a martial art that channels the user's inner energy into a form similar to sunlight, and Stands, psycho-spiritual manifestations of willpower that can have a wide variety of abilities. Each JoJo must gather a group of allies, master Hamon or their Stand, and defeat whatever villain is threatening the world.

The story is split into eight parts, the first six of which form their own saga focusing on the impact of a mysterious Stone Mask as well as a series of equally mysterious Arrows on the Joestar family's lives. With the last two, the series undergoes a Continuity Reboot of sorts with the storylines that occur afterward, set in an Alternate Universe that features many of the elements from the first six storylines. The series is famous for its original and unique art style, intricate plot, creative battles, and immense flamboyancy. It also features a huge number of allusions to rock and pop music, starting with Speedwagon and Zeppeli and going to names that result in a variety of Dub Name Changes due to being so specific.

In spite of its immense popularity, the series did not have a full anime adaptation for a long time. A series of OVAs based on Part 3 and a now lost-to-history feature film adaptation of Part 1 (both by studio APPP) were released in the meantime, though both took liberties with the source material. To commemorate the manga's 25th anniversary in 2012, the long-awaited anime adaptation produced by David Production, written by Yasuko Kobayashi that adapts Part 1 and Part 2, finally debuted. The 2012 anime was followed up with an adaptation of Part 3 in 2014, with an adaptation of Part 4 in 2016, Part 5 in 2018, and Part 6 in 2021. At Anime Expo 2015, it was confirmed that the 2012 anime would be getting an English dub. A similar announcement was made in 2016, with the test dub's cast returning. It finally saw its long-awaited debut on American airwaves via Toonami on Adult Swim, premiering October 15, 2016. The subbed anime can legally be viewed on

The series is (currently) broken down to eight parts across two different continuities (the split occuring at the end of Part 6):

There is also the series of spinoffs of one-shots chronicling the adventures of the eccentric Author Avatar manga-artist Rohan Kishibe, Thus Spoke Kishibe Rohan, which sometimes gets serialized either in Weekly Shonen Jump, Jump SQ, Shōnen Jump+ or Bessatsu Margaret. The chapters/one-shots (the first one published back in 1997) were compiled in two trade paperbacks. Also important to remark is that Kishibe has also starred in similar special one-shots such as Rohan at The Louvre (in collaboration with the Musée du Louvre) and Kishibe Rohan Goes to Gucci as a special collaboration between Araki, Gucci and Spur Magazine in 2011. A new manga spin-off, Crazy Diamond's Demonic Heartbreak, which features the unlikely pair of Hol Horse and Josuke Higashikata (Part 4) set before Part 4, was released in the January 2022 issue of Ultra Jump.

Not to be confused with the JoJo from JoJo's Circus.

Example of:
You Can't Fight Fate