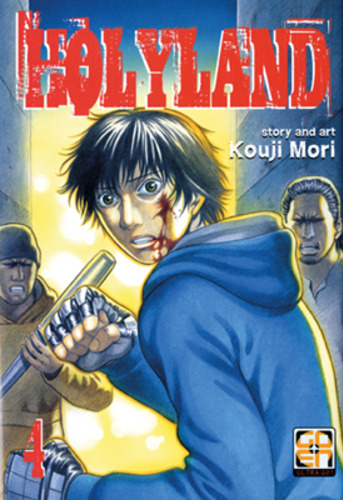 Between the worlds of boys and men, there lies Holyland, where laws don't matter and the strongest rule. In that world, he roamed. Yuu Kamishiro, he was there.
Advertisement:

Holyland is a fairly realistic martial arts-based manga series with footnotes on how any used or subverted trope fits in with how martial arts really work. The author is Mori Kouji, who also wrote Suicide Island and was a close friend of the late Kentaro Miura.

Meet Yuu Kamishiro, a young high school student who was bullied during middle school. The harassment gets to the point he stops going to school and starts secretly training to fight. A year later, disconnected from life around him, he has taken to roaming the streets looking for a place to belong.

He unleashes his secret left-right combo on random street thugs and in doing so gains a reputation as a thug hunter. He ends up fighting increasingly strong opponents as everyone wants to test his skill. Though the series deals a little with the reality of gang violence, people beaten into comas are usually out of the hospital in a few chapters.

The manga was serialized in the seinen magazine Young Animal from 2000 to 2008, and compiled into 18 volumes. It was adapted into a Live-Action TV Drama in 2005 and 13 episodes were made; it aired at late-night Fridays in Japan, on TV Tokyo. Another live adaptation, this one Korean, was made in 2012 starring Shin Dongho of K-Pop group U-KISS as "Kang Yoo".

This work provides example of: