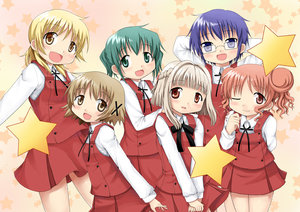 Providing you with nutbladder-breaking levels of cuteness, from left to right: Miyako; Yuno; Nori; Nazuna; Sae; Hiro.
Yamabuki High School's arts program attracts students from all around the country. The Hidamari Apartments is a small apartment block across from Yamabuki High School, infamous for housing weirdos from the arts program.
But they've all graduated! We're normal now!
— Customary introduction to the Hidamari Apartments at every year's welcoming party
Advertisement:

Hidamari Sketch is a Slice of Life manga and anime series centering on a young girl named Yuno who is accepted into the Yamabuki High art school and moves into a small apartment building nearby. She makes friends with other girls living in the building, and cute things happen. This series is best known for its slow pacing, focus on artistically inclined characters, and diabetes-inducing levels of cuteness.

The manga is licensed by Yen Press under the title Sunshine Sketchnote Despite this name change, the licensor kept the original name Hidamari Sketch in the logo's small English text above the red shape containing the translated title. The Japanese word "hidamari" is often translated to "exposure to the sun" or "sunny spot"., and the anime is licensed by Sentai Filmworks under the original name in a subtitled-only release.

Compare with Comic Girls another Moe Slice of Life about a dorm full of artists.