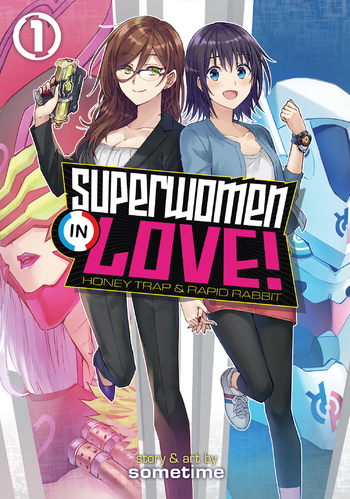 Honey Trap and Hayate
SUPERWOMEN IN LOVE! Honey Trap & Rapid Rabbit (Hero-san and Former General-san in Japan) is a yuri action-comedy by the artist sometime, that follows the adventures of the heroine Hayate, and a former evil general named Honey Trap.

When an evil Kaijin organization from another dimension, Antinoid, attacks the Earth, the hero known as Rapid Rabbit steps up to defend it. However, their cornered and defeated by the general Honey Trap... only to learn that the "Hero" is in fact a "Heroine" and promptly falls in love with her, and finding herself incapable of killing her, flees. She's then promptly fired by the Antinoid's leader, X, and without a home to return to, is saved by Rabbit, her real name Honjou Hayate, and chooses to stay with her to defend her town with her.

The series is licensed in North America by Seven Seas Entertainment.