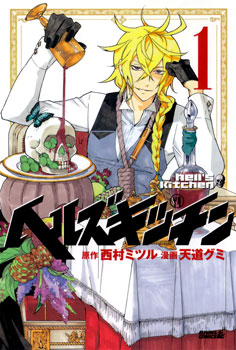 A devilishly Supreme Chef
Dogma, the Earl of Poor Eating comes to train high school student Satoru into the perfect chef. But what awaits Satoru at the end of his training is only death. Dogma himself is not an ordinary noble but a demon from hell who promises to eat his soul, spiced with a lifetime of cooking expertise. Will Satoru abandon his normal life to become the puppet of this demonic earl? How will he cope with his life's expiry tag?
Advertisement:

Let’s have a taste of this Heresy Gourmet!

Hell's Kitchen is a Shōnen cooking manga drawn by Amashi Gumi and written by Nishimura Mitsuru, who also authors Nobunaga no Chef.

Not to be confused with Gordon Ramsay's series Hell's Kitchen. Also do not confuse with Hell Kitchen, the former name of The Boy Who Fell.