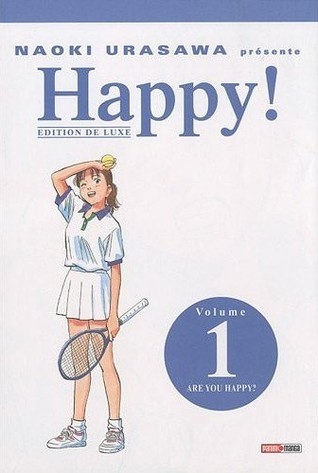 Happy! is a sport/competition Manga written by Naoki Urasawa. It's not a very happy series.

Imagine a puppy/kitten hybrid sitting in a cardboard box by the side of the highway. It's raining heavily and the box has no top. As people drive by, they throw rocks at the puppy/kitten. Such is the life of Umino Miyuki.

Umino is a nice young girl who received a Promotion to Parent to her three younger siblings, due to an accident during one of her older brothers' Get-Rich-Quick Scheme. She struggles to make ends meet. Then her older brother ends up owing 250 million yen debt to the Yakuza due to another Get-Rich-Quick Scheme. Worried about him committing suicide or being killed/injured and not really enthusiastic about becoming a prostitute to pay off her debt (as the yakuza tries to force her to) she decides to try her hand at pro tennis. This is not as unlikely as it sounds to the yakuza as she was previously the winner of an all-Japan junior Tennis Tournament. Unfortunately, her run of awful luck has just begun, surviving is going to take a miracle.

The series was published in Big Comic Spirits from 1993 till 1999, and there are 23 volumes in total.

Please do not confuse this with the comic book-turned-TV series about an imaginary magical flying horse.