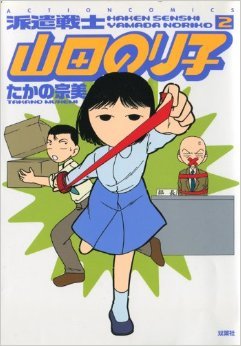 It is the story of a Noriko Yamada, a Temporary Employee in Tokyo.

Except "Temp Worker" translates to "Haken Sha-in", and the title is "Haken Senshi" - "Temp Warrior". This is because Yamada Noriko is no ordinary Temp - she's the Almighty Janitor to end all Almighty Janitors. If you can name it, she can do it. If you can get her stationed to your underperforming department, you're saved. And if you work in the same department as her and don't do your work properly? That's what the Katana is for.

In short, it's a Widget Series about Japanese office culture with amusing circumventions of normal office problems, relying on a mix of visual humor and puns to deliver the funny. One of the popular series in Manga Town.

Tropes found in this Manga include