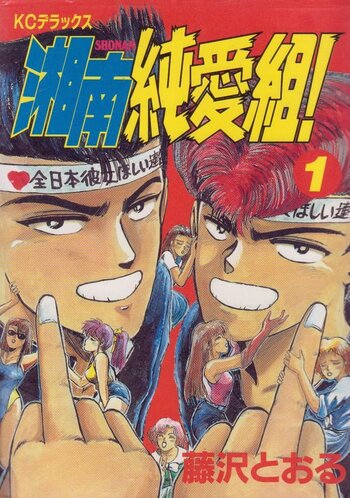 Ryuji (left) and Eikichi (right)
Meet 15-year-old Ryuji Danma and Eikichi Onizuka. Together they form the Oni-Bakunote literally "demon explosion" Bōsōzoku gang and are some of the toughest Japanese Delinquents around in their hometown of Shonan. However, their violent reputations do not endear them to the opposite sex, so they attempt to change their ways so they can get girlfriends and lose their virginity. As the story unfolds, it introduces more of the duo's friends and foes, and gradually shifts from a gag manga to a more serious fighting/drama series.
Advertisement:

GTO: The Early Years (JP: Shonan Jun'ai Gumi! note lit. "Shonan Pure Love Gang") is a manga by Tooru Fujisawa, better known as the creator of Great Teacher Onizuka, which is actually a sequel series to this one, following the adult Onizuka's life as a teacher. The Early Years ran for 267 chapters compiled in 31 volumes (longer than GTO, mind you) from 1990 to 1996, and was re-released in 15 deluxe editions in 2005. Multiple adaptations of the manga were created during the series’ run, such as a five-episode anime OVA series released on VHS from 1994 to 1997, a Japanese television drama, and several live action movies. An Origins Episode prequel titled Bad Company was released between the end of The Early Years and the beginning of GTO, showing the story of how Ryuji and Eikichi met. A live-action web drama adaptation starring Kanichiro Sato as Onizuka and Daichi Kaneko as Ryuji was released on Amazon Prime Video in Japan on February 28, 2020.

The manga also has a distant spin-off, Shonan Seven, focusing on the continued delinquent reputation Tsuji-do High cultivated long after Onizuka and Ryuji left. Shonan Seven was a collaboration between Fujisawa and artist Shinsuke Takahashi, and is complete at 17 volumes following its debut in 2014.

For characters, see the character page for Great Teacher Onizuka.

Tropes specific to the adaptations:

Example of:
Under the Truck