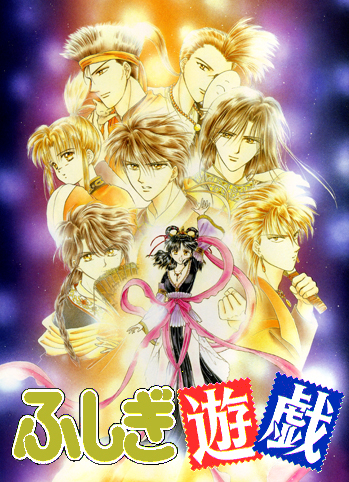 "This is the story of a girl who gathered the Seven Guardians of Suzaku. She obtained omnipotent power and made every wish come true. The story itself is an incantation. Whoever finishes reading it shall receive this power. As soon as the page is turned, the story will become the truth and begin."
Advertisement:

When gluttonous, underachieving schoolgirl Miaka Yuki and her best friend Yui Hongo find a strange book in the library, it changes their lives forever. Shi Jin Ten Chi Sho (literally, The Book of the Four Gods of Heaven and Earth, but rendered as The Universe of the Four Gods in the North American release) is an ancient book that is a gateway into another world that resembles medieval China — a gateway through which Miaka and Yui fall. Although Yui is sent back to Japan almost immediately, Miaka is trapped in the story. There she finds that she is the Suzaku no Miko — the prophesied priestess of the god Suzaku, who must gather together seven holy warriors in order to summon the god and save the country of Konan from its enemy, the country of Kutou.

Meanwhile, in the "real" world, Yui is reading about Miaka's adventures in the book, trapped by a sort of horrified fascination. Worse, she suffers many of the harms and indignities that Miaka undergoes, from soakings with water to bloody wounds.

Although she is sympathetic to Konan's cause, Miaka is worried about Yui and wants to go home. When she gets a chance to do so, she takes it, but upon returning to the library she cannot find Yui — who has been drawn back into the book and installed as the Seiryuu no Miko — the Priestess of Seiryuu, the god who favors Kutou, and similarly charged to summon the deity. When Miaka finally returns to the world inside the book, she finds that she and her once-best friend are now on opposite sides of what promises to be a bloody and devastating war. The only way for Miaka to prevent utter genocide is to win the race to be the first to summon a god...

Easily the most famous of Yuu Watase's works, Fushigi Yuugi (ふしぎ遊戯, Mysterious Play) was many anime fans' introduction to the fantasy shoujo genre after Sailor Moon. This work is considered a leader of the Trapped in Another World, “Reverse Supporting Harem” subgenres, and also one of the major forerunners of the "Reverse Harem"note Main heroine with Cast Full of Pretty Boys to choose from. subgenre in Japan; inspiring followers in form of the Harukanaru Toki no Naka de series, and the Angélique series, triggering the dawn of romance gaming, and Dating Sim gaming genres for girls in Japan, and the overall East Asian regions. The Fushigi Yuugi series also served as a Gateway Series for all non-Chinese demographics for its strong, and supportive usage of Chinese regional culture studies by incorporating the Wuxia genre, Chinese Mythology, The Four Gods, and its successful introduction of The Twenty-Eight Mansions

of the Chinese constellation system

Fushigi Yuugi was popular enough to spawn a full franchise, in release order:

Compare with The Twelve Kingdoms.

This series presents examples of: