Manga / Forest of Piano
aka: Piano No Mori 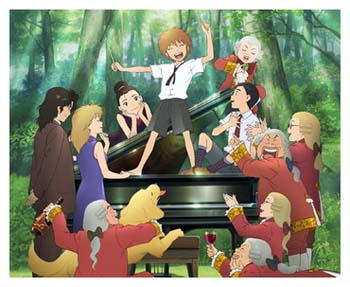 Forest of Piano (JP: Piano no Mori ~The Perfect World of Kai~) is a Seinen manga by Makoto Isshi, which was serialized in Young Magazine Uppers and Weekly Morning from 1998 to 2015 and compiled into 26 volumes.

It was adapted by Madhouse in 2007 as an animated film, covering a majority of the childhood arc up until the end of the concours.

A 2018 anime adaptation, in the form of a series, was produced by Fukushima Gainax. Two seasons have been produced thus far; both are available on Netflix.