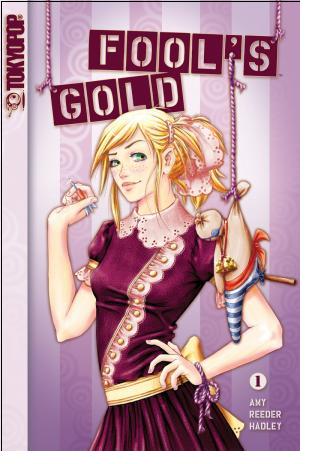 "You fooled me once, but that news is old. I swear to shun you, Fool's Gold!"

Fool's Gold is an OEL Manga series written and illustrated by Amy Reeder Hadley and published by Tokyopop.

The story follows Penny, a sophomore in high school who has come to the conclusion that All Girls Want Bad Boys, and she wants to fix this.She proposes that the reason girls are attracted to jerks is because the jerks are pyrite, or fool's gold: they look nice on the outside, but they're not really worth any girl's attention. Penny starts a club dedicated to identifying the pyrite in her school and then shunning them by having all club members swear not to date or associate with them. But when she labels a boy a pyrite a little too quickly, she's caused a lot of confusion as it starts to seem that he might not be so bad.

The series spans three volumes, the first two of which have already been published. Hadley has stated that the third volume is finished, but Tokyopop has no plans to release it at this time.

No relation to the movie starring Matthew McConaughey and Kate Hudson.