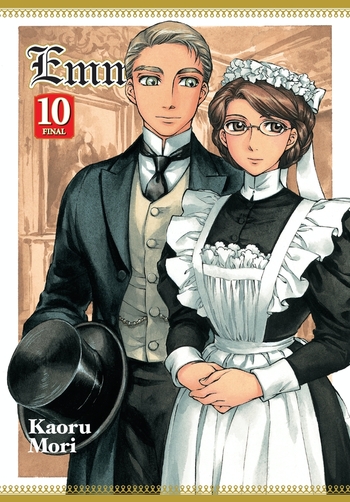 19th century London was a time of technological innovation; photography, trains, automobiles, and many other inventions were being thought up or refined. Societal expectations, however, hadn't changed much: what class you were born in still defined a lot about who you were and what you could do. This was as true for the poorer classes as it was for the rich elite, and any relationships across class boundaries were met with scorn and disapproval.
Advertisement:

Such is the setting that Emma lives in. She works as a maid for retired governess Kelly Stownar, an outwardly stern looking woman who possess a kind heart. Emma herself is proof of this, for she has knowledge that only the higher classes are taught, and a pair of glasses that only the rich would've been able to afford. There was something that Kelly couldn't give Emma, though: beauty.

Emma's good looks are part of what catches the eye of William Jones, a former student of Kelly's who stops by one day for a visit. Soon after meeting her, William becomes smitten with Emma and there's something about William's awkward demeanor that she finds charming. With a little help from Kelly, the two star crossed lovers begin a courtship.

Unfortunately, William has obligations to fill. His straitlaced father, Richard Jones, wants him to marry Elanor Campbell, the daughter of a viscount. A marriage to a viscount's daughter would raise the Jones' family's social status, something that a marriage to a humble maid would never achieve. As Emma and William's relationship deepens and forces threaten to tear them apart, they will have to come to their own decisions about their futures, both as individuals and as a couple.

Emma (エマ, Ema) is a historical romance seinen manga by Kaoru Mori. The manga was originally serialized in Comic Beam from January 2002 to May 2006, ending with 52 chapters compiled into seven volumes. Side story chapters as well as an epilogue were serialized under the name Emma: Further Tales from September 2006 to March 2008, collected into three volumes. All ten volumes were originally released in English by CMX. When CMX was dissolved, the series remained in limbo for several years until Yen Press rescued the series in 2015. They would re-release the series as a five volume omnibus set, printed in hardcover.

An anime adaptation under the name Emma: A Victorian Romance was made between two studios. Pierrot handled the first season which aired in 2005, and Ajia-Do produced the second which aired in 2007, adding the subtitle of "Second Act". The home release was handled by Nozomi Entertainment in 2008. In 2018, Nozomi launched a Kickstarter campaign in order to fund an English dub for season one, with a dub for season two being a stretch goal. The Kickstarter was a success, earning enough money to fund a dub for both seasons.