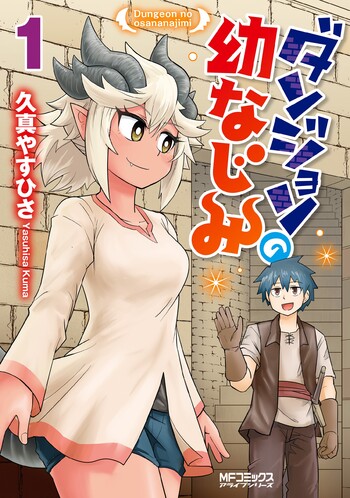 Ryuuka and Van
Dungeon!! It is a labyrinth full with horrifying monsters lurking inside. It can be called Fantasy...
Childhood Friends!! It is a friendship that spans from early childhood. A childhood friendship between a pair of boy-girl, in a sense, is a fantasy—
Advertisement:

In the infamous dungeon, Wyrm Hell, seventeen year-old swordsman Van fights his way down to its one hundredth floor, where resides its most dangerous boss, the Dragon King Obsidian. Once face to face, the Dragon King... transforms into a teenage dragon girl and the two of them spend the day hanging out.

Adventurer Van Sirius and final boss Ryuuka Obsidian have been friends since they were seven, and Van makes monthly trips to the dungeon to visit and deliver goodies from his mother while Ryuuka's minions look on and enjoy watching their relationship develop.

The monthly visits are set to come to an end, however, as Van reveals that he's joined the adventurer's guild in the town near Wyrm Hell, meaning he'll now be able to come visit Ryuuka every day.

Dungeon No Osananajimi by Yasuhisa Kuma is a fantasy Slice of Life in which a pair of unusual childhood friends hang out regularly.

Dungeon No Osananajimi contains examples of: