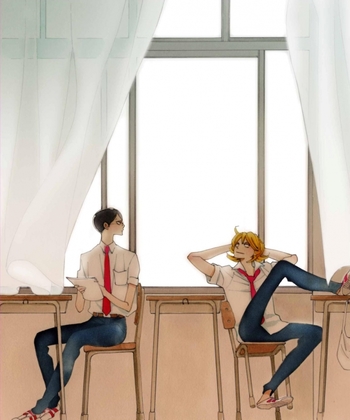 "A boy met a boy. They were in the flush of youth. They were in love that felt like a dream, like sparkling soda pop."
Advertisement:

In an all-boys high school, a class is preparing for an upcoming chorus festival. As the boys sing, Hikaru Kusakabe notices that one of his classmates, Rihito Sajou, is not making any noise. Kusakabe is a sleepy-eyed, carefree slacker who plays guitar in a band, Sajou is a straight-laced and serious honor student who got perfect scores on every subject on his entrance exam. Kusabake concludes that the two come from completely different worlds, so there's no reason the two would have any reason to talk, and as such, he'll never know why Sajou doesn't sing.

But by a twist of fate, Kusakabe and Sajou have a strange, quiet encounter alone in their empty classroom, and on the spur of the moment, Kusakabe offers to teach Sajou the song. In that moment, everything changes.

Doukyusei ("Classmates") is a manga by Asumiko Nakamura with several sequels and Spin-Offs. In 2016, the first work was adapted in an animated film produced by A-1 Pictures and directed by Shoko Nakamura.

Not to be confused with the classic Dating Sim of the same name.