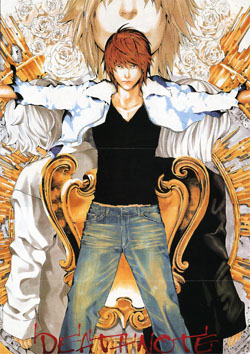 A boy and his god complex.
"The human whose name is written in this note shall die."
— Rule #1 of the Death Note
Advertisement:

While initially horrified at his actions, Light rationalises that he can use the Death Note as a force for good by purging the rotten and corrupt elements of society, thus creating a world free of crime and violence. A cult following soon arises around the mysterious assassin killing off criminals across the country, christening him "Kira" (a Japanese Ranguage approximation of "killer"). Kira's actions soon attract the attention of the international police community, now with grave concerns about the vigilante killings, and the world's greatest detective, an enigma of a man known only as "L".