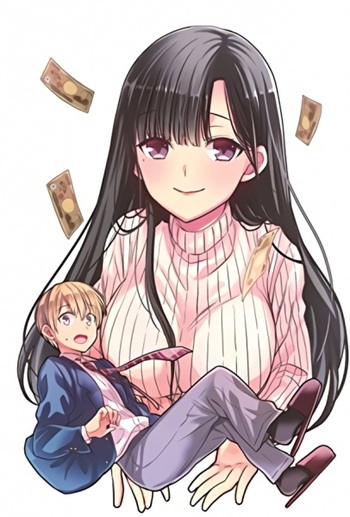 Minoru Soramoto's parents went and disappeared because of a rather huge debt, leaving him behind. Thankfully, he was saved from the debt collectors because of their next door neighbor, an older lady simply named "Onee-san" who takes him in. She's a very mysterious and very beautiful woman with a very strange problem: she is completely and hopelessly obsessed with Minoru, to the point of worshipping him like a god. But she also loves and adores him all the same...but why she feels that way is something Minoru's going to have to find out as his life with this Onee-san begins.

Danshi Koukousei wo Yashinaitai Onee-san no Hanashi (The Story of an Onee-San Who Wants to Keep a High School Boy) is a Romantic Comedy Shounen manga created by Hideki who first self-published it on his Twitter before being picked up and published by Weekly Shōnen Magazine on April 11, 2018.

The Story of an Onee-san contains examples of: