Manga / Dance in the Vampire Bund 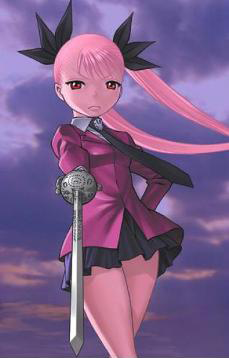 The ruler of all vampires.
No, really.

Out of the blue, Japan finds itself host to a new "mini-nation" inside of the Bund, an artificial island off the coast. Mina Tepes, heiress of the Tepes Dynasty of Vampires, announces to the world that Vampires exist, she has paid off Japan's national debt, and that they are choosing to live in peace inside the Bund from now on.

The story is told from the point of view of Akira Kaburagi, a Werewolf and Mina's chosen guardian. Giving up a life as an ordinary high school student when Mina decides to out the entire vampire population, Akira has his work cut out for him, as Mina has pissed off just about everyone with her announcement — the humans want to wipe the Bund off the face of the Earth, rival vampire clans want to wipe the Bund off the earth, and even members of her own family want her for their own reasons. And Rozenmann and Ivanovic, two of the Three Vampire Lords, want control of the vampires, which they aim to get by marrying her.

The series also has two side-stories which are as followed:

The original manga was announced to end on September 5th, 2012 follow but was followed by the above spin-offs. In 2013, the series continued with the subtitle "Scarlet Order" which takes place seven years after the events of the first series and sees Mina and Akira once more facing a threat to the Bund, this time from human opponents. It lasted four volumes.

Early in 2018 the manga returned with a new installement: Dance in the Vampire Bund A.S.O.

An animated adaptation was released in 2010 (trailer here

, NSFW) by Studio Shaft. The animated adaptation was later licensed and released by Funimation in the US. Similarly, the manga has seen a fairly faithful release by Seven Seas Entertainment in the west.

Seven Seas distributes Kaoru Shintani's (of Area 88 fame) Young Miss Holmes in which Mina makes a guest appearance in the Case of the Sussex Vampire (Nozomu Tamaki provides art for the arc's epilogue - which takes place during Mina's voyage to establish the bund itself).