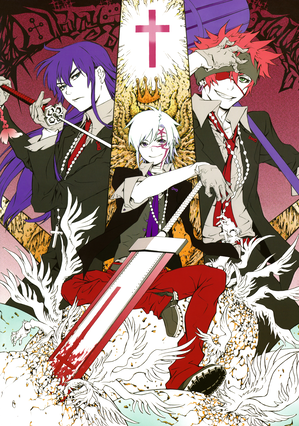 D.Gray-man is a manga (later adapted into an anime) about Allen Walker, a 15-year-old Exorcist with a deformed left arm which can transform into a weapon called Innocence. Allen fights against the Millennium Earl and his Akuma: living weapons created by trapping a human soul inside a mechanical body using Dark Matter, and having it wear the skin of the human that created it in the first place. The Millennium Earl wants to use these to destroy humanity, and Allen, who was cursed by an Akuma as a child, is caught in between. The Black Order, which he joins early in the series, is a religious organisation of Exorcists that seeks to stop the Earl and destroy his Akuma using Innocence. As the story progresses, a conspiracy unfolds involving the Noah Family - a group headed by the Earl - and the mysterious "14th" Noah.

Written by Katsura Hoshino and first published in Weekly Shonen Jump in 2004, the series is known and loved for blending typical shonen action tropes with a Gothic sensibility and a sense of design that borders on the surreal. The series also tends to go on hiatus a lot due to the author's bad health. One hiatus ended on August 17, 2010, when a 50-page chapter was released. The series then switched to a monthly schedule − but releases stayed sparse. Another chapter was released in late 2012, after which Hoshino went on yet another hiatus due to illness, and the latest chapters were compiled into Volume 24.

By November 2014, Hoshino showed signs of having healed enough to draw again, and finally the manga resumed serialization on July 17, 2015 in Jump SQ Crown (which became Jump SQ Rise in 2018). The catch? It is now a quarterly release instead of monthly, meaning only 4 chapters a year. In part because of all these hiatuses and magazine changes, the tone, direction and artstyle of the series changed several times, to the point the early volumes and the latest ones might almost seem like a different series.

The Animated Adaptation, produced by TMS Entertainment, premiered on October 3, 2006 and ran until September 30, 2008, after 103 episodes. Due to the aforementioned hiatuses in the manga brought about by Hoshino's bad health, this anime series came to an end in the middle of volume 16. A continuation, D.Gray-man Hallow, premiered on July 4, 2016 and concluded on September 26, 2016, after 13 episodes. Since Hoshino was dissatisfied with TMS's previous anime adaptation, Hallow was produced under her supervision. Like later chapters of the manga, Hallow also saw a change in artstyle from the previous series.

Funimation has licensed both the original anime series and Hallow in North America, Initially, the company only released the first fifty-one episodes of the original series, and haven't touched it since 2011. Shortly after Hallow's simulcast announcement, Funimation announced that it also acquired the rest of the 2006 series (episodes 52-103, known as the "2nd Stage").