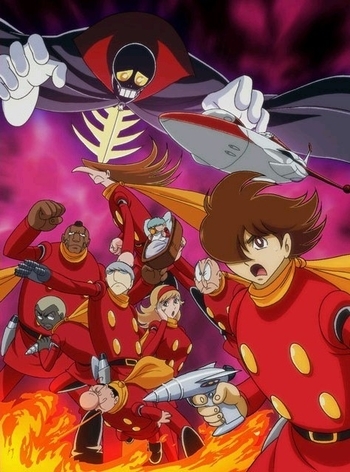 Originally a manga by Shotaro Ishinomori that was serialized in several different magazines from 1964 to 1981, Cyborg 009 has been adapted into four movies, as well as three anime series in 1968, 1979, and 2001.

The nine cyborgs are:

There is a Recap page that spans three generations of television and currently under construction.

All but 5 episodes of the 2001 series were aired on Cartoon Network's Toonami block during the mid-2000's, however those episodes were finally available in the US for the first time thanks to Discotek Media rescuing the series and releasing it on SD Blu-ray

. The 2001 anime is also now streaming on RetroCrush

In 2008 mangaka Yasushi Hoshino wrote and illustrated a 62 pages oneshot retelling of the team's origin story for a special issue celebrating the 50th anniversary of Shonen Sunday. It's a slightly more Darker and Edgier retelling and contains a few elements that would be picked up by following adaptations, most notably giving 002 a more realistic redesign. It's never been collected in volume or reprinted.

009 Re:Cyborg was released in 2012, directed by Kenji Kamiyama of Ghost in the Shell: Stand Alone Complex and Eden of the East fame and its music composed by Kenji Kawai. A manga adaptation of this film also came about, and was published in Monthly Big Gangan magazine. But wait—there's more! In addition to this, a western graphic novel reimagination

was released in September 2013, written by F.J. DeSanto and Bradley Camp and illustrated by Marcus To. Don't quit reading now! Look at the bottom of the GN page. There is also apparently a live-action movie being planned.

Through 2012 to 2014, a finale titled "Conclusion: God's War" was published through Shogakukan, adapted from Ishinomori's notes and drafts of a final arc that he'd never gotten to write for the series. It was written by his son, Jo Onodera, and illustrated by Masato Hayase and Sugar Sato, who were assistants of Ishinomori. This officially ended the Cyborg 009 manga, after the series was left hanging for decades and after Ishinomori passed away before he could complete the story.

A crossover OVA trilogy between the series

and Devilman, called Cyborg 009 VS Devilman, was released on October 2015. It received a worldwide release streaming on Netflix in April 2016, complete with an all new English dub.

A new All-CGI Cartoon film trilogy directed by Koudai Kakimoto (with Re:Cyborg's Kenji Kamiyama as chief director) titled Cyborg 009: Call of Justice was announced and released over the course of 3 weeks (November 25, December 2 and December 9, 2016). It's based around an original story with the cyborg team going up against a mysterious organisation that possess powers named 'Blessed'. The films were released worldwide via Netflix