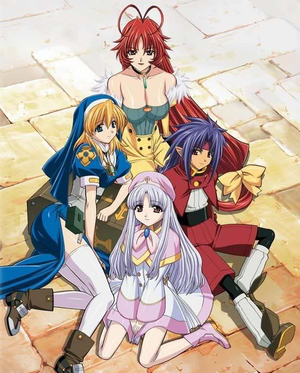 Clockwise from bottom: Azmaria, Rosette, Satella, and Chrono.
"My name is Chrono. I'm what you humans call a demon."
— Chrono
Advertisement:

Chrono Crusade (or Chrno Crusade if you want to be literal) is a manga by Daisuke Moriyama that ran in Monthly Dragon Age from 1998 until 2003. Studio Gonzo made an Animated Adaptation of the series towards the end of the manga's run.

The story takes place in America during the 1920s and follows Rosette Christopher, a "gun-toting nun" and exorcist who works for the Magadalan Order, and her assistant Chrono, a cute, chipper boy who is really a demon himself. Together, the pair aim to stop demons that would harm innocent people while searching for Rosette's missing brother Joshua, who was kidnapped by Aion, a demon with ties to Chrono's past. Along the way they pick up Mysterious Waif Azmaria and Cool Big Sis Satella and slowly begin to unravel the mysteries behind the powers of the children known as Apostles, and the plans Aion has for Joshua.

This series is known, regrettably, for confusion among Western otaku over how the title should be spelled. Originally titled "Chrno Crusade" in Japan due to a typo (or so Moriyama says), this name carried over amongst people who watched the anime via fansubs. Those same people were unhappy when the series's Western publisher "corrected" the title, refusing to acknowledge it. Years later, a reissue of the manga restored the missing "O" (which was highlighted by a flame

just so you know it's there.

Both the manga and the anime were licensed in North America by ADV via their various publishing arms. The manga fell out of print when ADV shuttered their comics division in 2007 and is currently unlicensed, so if you want to read this series legit and see any volumes for sale anywhere, snatch them up. Funimation picked up the rights to the anime in 2010 and has released it in a single set containing all 24 episodes. It has also aired on American television, first on The Anime Network (created by ADV), then on Showtime Beyond, before Manga picked up the broadcast rights and aired it on Syfy's now-defunct anime block.

Has nothing to do with the Square games Chrono Trigger and Chrono Cross. Not even if the original Japanese logo with overlapping "C"s bears a striking resemblance to the aforementioned games', and if Crusade sounds like the next in the series after Trigger, Cross, and Break.

It must be noted that the manga and anime for Chrono Crusade differ on some things – particularly the ending, which drastically changes depending on which version of the story you're seeing. Because of this, this page is divided into three sections: tropes that are universal for the series, and tropes that only fit the manga or anime.