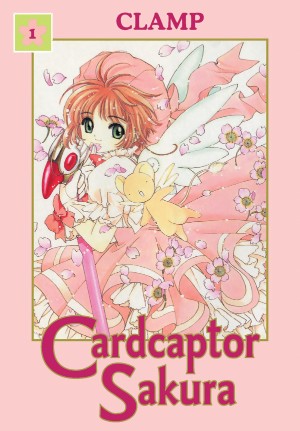 "Key that hides the power of darkness, reveal your true powers before me. I, Sakura, command you under our contract. Release!"
Advertisement:

An incredibly iconic Magical Girl manga written and illustrated by CLAMP and first serialized in Nakayoshi from 1996 to 2000, with an anime adaptation by Madhouse airing on NHKnote first on the expanded tier BS2 satellite service, and in repeats on the Educational over-the-air network from 1998 to 2000.

One day, an ordinary elementary school girl named Sakura Kinomoto wanders into her father's basement and accidentally opens a mystical tome containing a deck of tarot-like cards. The magical cards are scattered throughout town, each one possessing its own unique power and posing the risk of causing some serious mischief if left unchecked.

Kerberos, the guardian spirit of the book, immediately drafts Sakura into becoming a "Cardcaptor" by giving her a magical wand capable of sealing and controlling the power of the cards. Now, with the aid of her best friend Tomoyo, Sakura must recover and master all of the missing cards before they can cause some real trouble.

One of CLAMP's most iconic manga series, it was adapted into a seventy-episode anime and two movies, which added a lot of new elements in the process. Alongside Sailor Moon, it is widely considered to be a Trope Codifier for the Magical Girl genre, and its influence remains nigh-universal, particularly in Japan.

The anime was dubbed by Nelvana and The Ocean Group as Cardcaptors with much Bowdlerization in the process* Most of which was actually done by Kids WB!, not Nelvana.. The US version changed many details and even episode order to shoehorn secondary protagonist Syaoran Li into the main character slot (as a co-protagonist with Sakura) in an attempt to make the show appeal more towards young boys. The Canadian and UK releases kept the original episode order while Australia and New Zealand used the Japanese credits, which undid some of the meddling. An alternate dub from Omni Productions aired on Animax stations around the world.

Geneon, who released a subtitled version of the TV series, took over the dubbing of the second movie, making it far more faithful to the original. The manga was originally licensed by Tokyo Pop and is now out of print. It was rescue-licensed by Dark Horse Comics, who made four omnibuses of the series, though their release is also out of print. The license was transferred to Kodansha Comics USA, who plans on making nine hardcover volumes of the series. The anime has now been rescued by NIS America, and both movie are rescued by Discotek Media. In the former's case, the Animax dub was used for the release, while in the first movie's case, the Nelvana dub (which was visually uncut) was retained. The second movie also retains the old Pioneer/Geneon dub.

Compare Sailor Moon, which is the other "major" example most English-speakers think of vis-à-vis Magical Girls. Contrast Revolutionary Girl Utena, Princess Tutu, and also Puella Magi Madoka Magica, the most notable Deconstructions of the whole genre and concept (and the last of which feels aimed rather squarely at this series in particular).

The next episode previews for Cardcaptor Sakura have her talk about the upcoming episode. RELEASE!

Example of:
On the Next

The next episode previews for Cardcaptor Sakura have her talk about the upcoming episode. RELEASE!