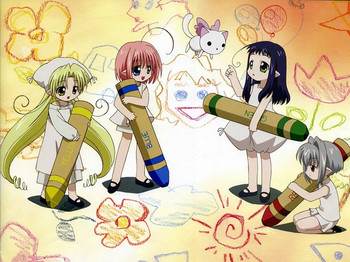 Left to right: Chiriri, Kururu, Oborochan, Hororo, and Sarara
"In short, if we go through this 'entrance ceremony', that means we can go to school!"
Advertisement:

Bottle Fairy is a 2003-2005 manga project serialized in the manga anthology Magi-cu, based on a community-sourced storyline and drawn by Yuiko Tokumi. It received an anime adaptation in 2003, directed by Yoshiaki Iwasaki and produced by Studio Orphee and Xebec.

Kururu, Sarara, Hororo and Chiriri are little season fairies living in bottles in the bedroom of a college student they call "Senseisan" (literally "Mr. Teacher"). The series focuses on their learning about the human world, letting their imaginations get away with them, and experiencing all the months of the year. All the while, the four fairies (especially Kururu) develop crushes on Senseisan and decide that they absolutely must become human. Or, condensed: Cuteness galore.

Not to be confused with the trope formerly known as Bottle Fairy (Now Hard-Drinking Party Girl).