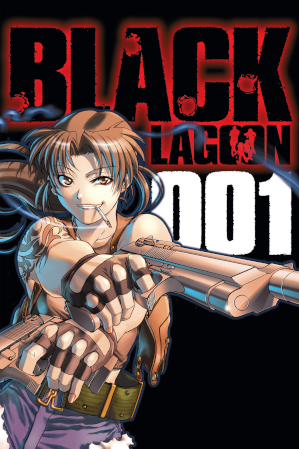 She smokes cigarettes and guns!
"Rock, if you think about it, other than this, what do we really value in life? God? Love? Don't make me laugh. When I was a brat, crawling around in that shithole city, it seemed God and Love were always sold out when I went looking. Before I knew better, I clung to God and prayed to Him every single night — yeah, I believed in God right up until that night the cops beat the hell out of me for no reason at all. All they saw when they looked at me was another little ghetto rat. With no power and no God, what's left for a poor little Chinese bitch to rely on? It's money, of course, and guns. Fuckin' A. With these two things, the world's a great place."
— Revy
Advertisement:

Rokuro's life changes forever when the company asks him to deliver a data diskette to a customer in the South China Sea — his ship comes under attack by pirates with a torpedo boat, who nab the disc and bring him with them as a hostage for ransom. Twenty-four hours later — after a series of events that include being nearly shot by his captors, surviving a bar shootout, being chased by a gunship helicopter, and being declared legally dead by his own company — Rokuro (now rechristened with the nickname "Rock") joins up with the pirates, a gang of Americans who run a small boat courier service known as the Lagoon Delivery Company.

Sawyer is in a manga spinoff written by Rei Hiroe and illustrated by Tatsuhiko Iida known as Black Lagoon: Sawyer the Cleaner - Dismemberment! Gore Gore Girl. As of 2021, 2 volumes are out.

Example of:
Why Won't You Die?