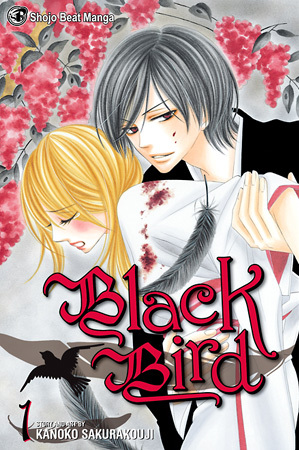 Misao Harada has been able to see supernatural beings since birth. Normally, these demons and monsters would only do harmless things, but ever since her sixteenth birthday, they've become a threat to her life. When one of these beings attempts to kill her, Misao's life is saved by her former childhood friend, Kyo Usui. As it turns out, Kyo is the leader of the tengu, a bird demon clan.
Advertisement:

Misao learns that she's the Bride of Prophecy: a maiden whose flesh is rumored to give immortality and whose hand in marriage can give any clan who claims it prosperity. Obviously not wanting to be eaten or kidnapped, she enters the protection of Kyo and his clan. For his part, Kyo would give anything to marry her himself, but the mysterious Record of the Holy Fruit hovers over both of their heads.

Black Bird (ブラックバード, Burakku Baado) is an urban fantasy shojo manga by Kanoko Sakurakoji. It was serialized in Betsucomi from July 2006 to December 2012 and was complied into eighteen volumes. The English release was handled by Viz Media.

In 2010, a light novel adaptation was released under the title Black Bird: Missing.

In 2019, a stage play adaptation ran for five days.