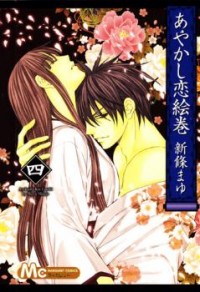 Ayakashi Koi Emaki (Japanese: あやかし恋絵巻, Demon Love Spell) is a manga series by Mayu Shinjo about a shrine maiden that finds herself falling for a demon that feeds on passion and love. Shinjo initially wrote Ayakashi... in 2008 as a two part installment manga for Margaret magazine, but chose to serialize the series in 2009 due to the story's popularity. In 2012 Viz Media licensed the manga with the intention to publish it in English through their Shojo Beat imprint and released the first volume in December of that same year.

The series follows Miko Tsubaki, a young shrine maiden living with her family. She's frustrated that she's unable to contribute much to the family business, as she has little apparent supernatural abilities and cannot easily see or banish spirits. She eventually runs into Kagura, an incubus that has been feeding on the female students at Miko's school: she manages to seal him, but in the process turns him into a chibi, lower powered version of himself. Whoops?

Miko initially tries to keep him secret from her family, but they inevitably discover Kagura but allow him to remain with Miko due to his small size. Meanwhile, Kagura has shown the ability to enter Miko's mind while she's sleeping, where he is able to assume his full size; he uses this as an opportunity to attempt to seduce Miko and recover some of his powers, with some success... In the meantime, however, they must learn to team work and banish all the other youkai that are showing up in their surroundings!

Ayakashi Koi Emaki has some tropes...