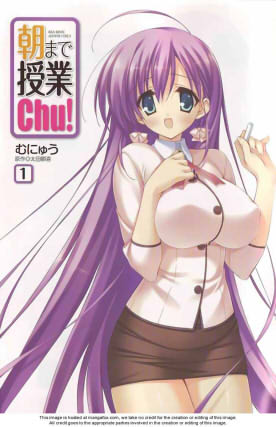 "Madam Principal! In that case, I'll live with Yuuki-san! As my way of taking responsibility, I'll watch over him!"
— Kakinozaki Ayana

Kagama Yuuki finally manages to get into the school of his dreams through a scholarship... however, due to an administrative error (his name sounds like a girl's name), he was placed in the girl's dorm. As the principal is unable/unwilling to reassign him to the boy's dorm, she tells him that if he causes any trouble, he'll be expelled immediately. Not wanting to leave the school so soon, he accepts a deal to room with the teacher responsible for the problem in the first place, Kakinozaki Ayana-sensei, under the condition he dress like a girl and no one finds out. Naturally, Hilarity Ensues.

Written by Ohta Akiyoshi, Asa Made Jugyou Chu! is a Seinen series with fanservice that could give To Love-Ru a run for its money. Currently has an OVA.

Asa Made Jugyou Chu! provides examples of the following tropes: