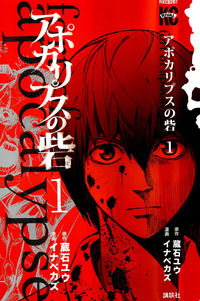 Apocalypse no Toride ("Fortress of the Apocalypse") is a horror action manga written by Yuu Kuraishi and illustrated by Kazu Inabe. It was serialized in Shonen Rival from 2011 to 2015 and collected into 10 volumes.

The story follows 4 inmates at the Shouran Juvenile Reformatory: the falsely accused Maeda Yoshiaki, cool but dangerous Masafumi Yoshioka, the strong and silent but fair Iwakura Gou, and the smart-mouthed genius Yamanoi Mitsuru. Upon arriving at Shouran on false murder convictions, Maeda Yoshiaki would rather be anywhere on earth, but when a van full of infected zombies crashes into the prison and its passengers begin to attack the guards and inmates, Maeda and his cellmates begin a fight to the death to stay alive amongst the infected from the outside world and the anarchy that arises within the prison. Eventually forced to leave the prison's walls of safety, the boys of Cell 4 find horrors in the ravaged cities beyond what they could have ever imagined.