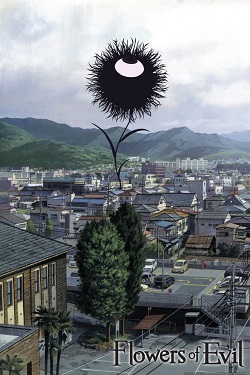 Saeki-san, I'm sorry.
I'll spend the rest of my life atoning for this crime.
Even when I'm an old man, I'll still be making up for this.
But there's nowhere to escape. Not in this town.
Not for me. The town is surrounded by mountains.
There's nowhere for me to run.

Aku no Hana (The Flowers of Evil) is a dark tale about gym clothes, blackmail, teenage drama and the desire to do something different.

The Protagonist of this tale is Takao Kasuga, a keep-your-head-down middle schooler from the rural town of Gunma, Japan. He has friends, gets less than average grades, and respects his parents. He also a passion for reading books, inherited from his father. Of his many-volumed collection, the crown jewel is the prized first edition of "Les Fleurs du Mal" by Charles Baudelaire.

On an average day much like any other, Kasuga returns to school after forgetting above mentioned book, when he stumbles across the gym clothes of his crush, Nanako Saeki. In an abnormal fit of lust, he steals them and takes them home. The following day, the school lights up with Gossip Evolution as to who the pervert is. Overwhelming shame forces Kasuga to further hide his crime. On his ride home, he is stopped by Sawa Nakamura, residential evil quiet girl and his worst nightmare come true. She knows about his crime and will expose him if he does not fulfill a contract. From there, things get crazy.

An anime directed by Hiroshi Nagahama and produced by ZEXCS premiered on April 15, 2013. The manga was adapted into a film in 2019.

Not to be confused with the Korean manhwa. See also Inside Mari, Happiness, and A Trail of Blood for the author's other work.