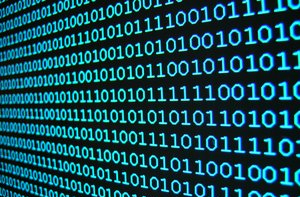 "The machine doesn't see Herc the way you or I see him. The machine sees Herc as a series of ones and zeroes..."
— Joel, Mystery Science Theater 3000, Hercules Against the Moon Men

The personal computer more or less came about when TV writers were right in that middle third. Writers do not really understand either computers or the Internet, and — despite the fact that a fair demographic can barely even imagine a world without them — assume that no-one else does either. The results of this ignorance are ideas such as A.I. Is a Crapshoot, Everything Is Online, and this trope.

With very few exceptions, whenever a computer plays a major role in a story, you can expect to be treated to some (ofttimes bizarre) exposition about how a computer works, just to make sure you understand what this magic affair of a typewriter tethered to a television really is.

Specifically, you are exceptionally likely to have a character helpfully explain that, "A computer sees everything as a series of zeroes and ones."

This can be meant to imply several things: a computer is not capable of abstract thought; a computer can deal only with certainties, not probabilities or shades of gray; a computer cannot lie; a computer must behave logically; a computer can be programmed by tapping in binary instructions Morse Code-like by shorting across a circuit, among others. Every single one of these is wrong.

"A computer sees everything as a series of zeroes and ones." is true, but only in the same way as "a human sees everything as a matrix of hues and intensities" or "a dog is composed entirely of protons, neutrons, and electrons": it's technically correct, but not really meaningful in terms of interacting with the computer. The level at which a computer deals with "zeroes and ones" is the level of digital electronics, a level which is so far below the level at which you operate on the computer that it's actually comparatively difficult to deal with zeroes and ones directly. Even the most fundamental operations on a computer almost always deal with blocks of 8, 16, 32, or 64 of these zeroes and ones at a time. A simple computer circuit that adds two numbers and shows the result in two displays, will involve at least 7 basic integrated circuits and an insane amount of wiring. Modern circuitry is billions of times more complex, and the industry uses special hardware-description languages, such as VHDL, to automate the daunting task of designing such integrated circuits from scratch.

One common manifestation is that the writers treat binary as a language, when it's actually just a number format (also called base-2). A series of binary numbers has no implicit meaning unless you know exactly how it's supposed to be interpreted: what binary format is being used (is it 8 bit? big-endian? how are negative numbers handled?) and what the data is supposed to represent (ASCII text? color values? hit points?). Consider that the letter-sequence PAIN means different things to speakers of English and French (it's French for "bread"). A Minus World is an example of what may happen when a program interprets data in the way it's not meant to.

A computer manipulates data according to a set of rules. The way that data is represented has no meaningful impact on the "philosophy" of a computer beyond the difference between digital and analog — which becomes completely academic

if you toss enough bits at a problem.

Alternative Title(s): Ones And Zeroes, Zeros And Ones