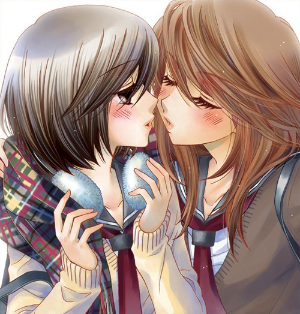 Since homosexual men are called "gay," homosexual girls should be called... "ecstatic".
"Yuri is a blessed thing. The refined and subtle actions, the warmth, of a world where only girls reside...yet also the pain of interpersonal politics and selfish intrigue. And finally, those strong emotional bonds before which no hardship is an insurmountable obstacle. Verily, a finely-honed mental and spiritual realm for transcending the crude conceptions of the male mind!"
— Hanadera Keisuke, Yuri Danshi
Advertisement:

Yuri is a genre distinguished by many tropes, stereotypes, and specific plotlines or interactions. The term "yuri" is so strongly associated with those tropes and stereotypes that some Japanese yuri fans use a different term, like "bian" (short for lesbian)note "lesbian" and its abbreviated version "les" are often used and seen as pejorative in Japanese culture, "Onna x Onna" ("woman and woman" (the x is usually pronounced as "to", "and" in Japanese)), or "Onna-doushi" ("women together") for works which are actually by/for lesbian women. Yuri is commonly an idealized and unrealistic portrayal of sapphic relationships, like most romance, and is not representative of actual sapphic people, culture, community, and experiences. This is, in part, due to the genre's high Fluff content.

The most common tropes you find in yuri, especially older yuri, are Senpai/Kōhai, Tomboy and Girly Girl, and Teacher/Student Romance. All three of these tropes can be cast in a particular light to make them appear to mirror or emulate heterosexual couples (see the Analysis page).

This entry is for the genre specifically. Works should be listed only if they are released as, described as, and/or feature yuri. Couple-specific examples should only be listed below if they're the focus of the series. See also: Slash Fic and Cast Full of Gay. Compare and contrast Pseudo-Romantic Friendship. The Spear Counterparts of Yuri are Yaoi, Shounen-Ai, and Bara, which feature male-male romance and sexuality.

Subtropes associated with the Yuri genre