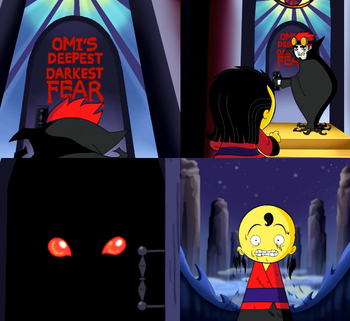 Someone or something is tormenting our heroes in their sleep, be it one of their regular menaces or something new. At best, the recurring nightmares are causing them sleepless nights and impairing their performance in the real world. At worst, they find that any injuries in the dream world carry over to the real world and their lives are in serious danger. Either way, the protagonists must find out how to stop their night-time tormentors.

Subtrope of Talking in Your Dreams. May be mistaken for Past Experience Nightmare, Anxiety Dreams, Dreaming of Things to Come, Dream Spying, or Dreaming of Times Gone By. Indeed, those tropes can be used by the attackers.

See also Primal Fear, Nightmare Dreams, and Nightmare Weaver. Not to be mistaken for Your Favorite, unless you are a Nightmare Fetishist.

Not to be confused with I'm Your Worst Nightmare (which is just the phrase).

The Gremloblin has the ability to show someone their worst fear through eye contact.

The Gremloblin has the ability to show someone their worst fear through eye contact.